We carefully reviewed the anecdotal evidence of the existence of such precursors, as well as the options for scientific investigation, built three observation stations in Indonesia (Fig. 3), and conducted measurements there for three years. We found a few signal patterns derived from animal observation worth pursuing showing some similarity to measurements by other researchers (concerning e.g. disturbances of the ionosphere). Although earthquakes happen frequently in the overall target area, on a local scale (at our stations) we still don’t get a sufficient number to add up to a statistically significant population.

The long-term goal of the project consists in finding seismic precursory phenomena (“precursors”), capable of announcing strong earthquakes on a short-term basis as well as triggering abnormal animal behavior.
We conclude that our technology has to be improved and based on many more observations to become useful. From the analysis of the general animal behavior and the frequency of destructive earthquakes we can only expect a non specific reaction and therefore we are forced to monitor as many environmental parameters as possible to exclude other reasons for changing animal activity. Now having an idea about the possible cause more sophisticated geophysical methods can be developed and employed – which at the (far) end might be even able to replace the animal approach. Still on the animal side of the project is much to do like optimizing the conditions of the animals for observation and development of more precise observation and behavioral analysis methods which can give further input and ideas for the geophysical device development.
We now think that animals (including humans, actually) are gathering otherwise “hidden” information by virtue of a supreme capability (of their neural systems = brain). These neuronal systems can combine efficiently the input of various sensors – what is otherwise just seen as noise will have a meaning!
Our approach, at present, comprises three topics and lines of work:

In order to get sufficiently many significant data, we should observe (not just discrete events we have to wait for, but) the on-going processes – mechanical and possibly electromagnetic – in geologically active zones, i.e. within approx. 10 miles around an active (seismogenic) fault. In this line of work, we want to verify the faults, understand the fault mechanism as best we can from observation, and find promising areas where geophysical and bioactivity sensor arrays can be maintained for long periods of time.

Continual observation of the processes at depth requires determination (incl. separation from noise) of very weak geophysical signals. This in turn requires sensor arrays (in contrast to single sensors), high-resolution digitizing, exact time-keeping, and superior signal filtering and processing (which we are still working on). We have acquired and tested sensors for seismic, acoustic, electric, magnetic, and atmospheric quantities, and are about to build a suitable data collection and transmission unit. 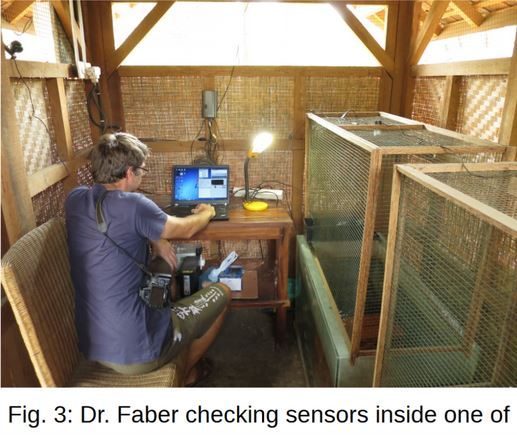 The Indonesian partners have operated various activity sensors, suitable for use on small and medium-sized animals, as well as cameras, and built custom data collection and transmission units. The biological constraint turned out to be the use of animals (rat, catfish, chicken, cattle, buffalo), the keeping and behavior of which is known to local people, and also sufficiently well in a scientific sense, to be analyzed against the data. Challenges are the long-term reliability of data gathering units in remote places and extraction of valid animal activity patterns.